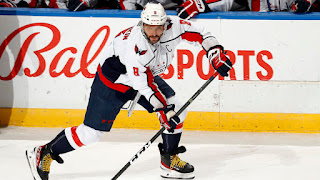 Hockey season is back, this time for a regular full season and one of the legends of the current game is showing he hasn't lost a step in his older age.  Washington Capitals left winger Alex Ovechkin continues to climb up the all time scoring charts and shows now sign of slowing down.  Ovi led the Caps to four big victories during the week to thrust them to within a point of the Metropolitan Division lead.  His two goals during the week pushed him to 742 career total, for fourth all time (trailing only Gretzky, Howe, and Jagr).  He added six assists along with a plus six in the four wins.  The Caps are looking for another Stanley Cup playoff run and their first chance to lift the cup since 2018 when he took home the Conn Smythe Trophy.  This week, he gets the Longhorndave Sportsman of the Week trophy!
Posted by longhorndave at 9:34 PM