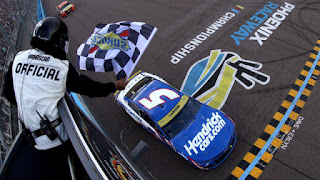 The 2021 NASCAR season ended in dramatic fashion with four top teams vying for the Championship.  Unlike other motor sports like Formula 1, the NASCAR playoff format ensures four teams compete for the Season Championship in the last race.  Some argue that it's not fair to the best team or two in that they may have been the best over the full season but not win a title.  But frankly, that's the way it is in most sports in which one game or series decides the winner no matter the regular season records.  Well this year, the top regular season driver won the NASCAR Cup Series Championship.  Kyle Larson and his number 5 team of Hendrick Motorsports (HMS) had won 9 races over the season entering the championship race in Phoenix.  Make it ten.  It was not a foregone conclusion over the mile track, as each of the Playoff 4 teams led or would even be considered favorites at any point.  But a clutch final pit stop and restart after a yellow thrust Larson's number 5 HMS team out front and he would not be caught.  He didn't have to win the race to win the championship, but he did.  In his first year in the 5 car, Larson brought his team the title.  Fitting end to a great season.  Larson is the Longhorndave Sportsman of the Week!
Posted by longhorndave at 9:06 PM