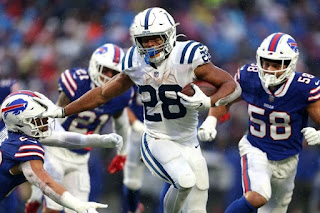 The NFL is rounding the midseason battles and heading into a stretch run.  One team to watch is the Indianapolis Colts, as from a trend perspective, they're headed in the right direction.  This week they obliterated AFC Playoff contender Buffalo Bills on the road 41-15, led by their upstart running back who is entering elite status.  Jonathan Taylor shredded the Bills defense for 185 yards and 4 TDs on the ground, then added a TD catch to end with total yards over 200.  The Bills had only once given up more than 24 points in a game but Taylor scored that on his own!  Taylor now has at least one TD in eight straight games (Colts are 6-2) with 100 yard games in 5 out of 6, and 6 out of those 8.  The Wisconsin stud in his second year has two 1000 yard seasons and seems poised for a stellar career.  Taylor is a deserving Longhorndave Sportsman of the Week!
Posted by longhorndave at 9:16 PM