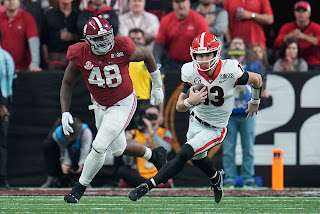 What a season and what a story for the Georgia Bulldogs in winning their first football National Championship in 40 years.  Having fallen just short in years past, especially to the dynastical Alabama Crimson Tide, Georgia finally put it all together in the title game to secure the College Football Playoff trophy.  They were led by senior quarterback Stetson Bennett who, coming into the season as a backup to much more highly touted talent J.T. Daniels, wasn't expected to be a significant contributor.  However, as Daniels could not recover from an early season injury, it was the former walk-on Bennett who kept the team going through a tough SEC schedule and came out the other end a champion.  In the College Football Playoff Championship Game, Bennett threw for an efficient 224 yards, but protected the ball well with no interceptions (and just one, unusual looking fumble that many thought was a pass).  His two touchdowns came on his last two completed passes.  It was old school tough Georgia football, both in grinding out rushing yards and keeping the vaunted Crimson Tide defense in check that put the Bulldogs on the championship podium.  Led by unlikely local hero Stetson Bennett, the Longhorndave Sportsman of the Week!
Posted by longhorndave at 5:26 PM