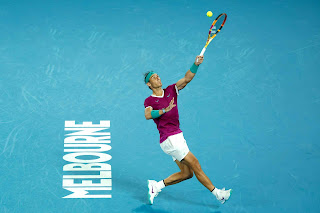 Gentlemen's Tennis will never likely see again the sustained success of the three greatest Grand Slam Titles winners playing at the same time over the last decade plus in the names of Rafael Nadal, Roger Federer, and Novak Djokovic.  It was Rafael Nadal that inched ahead in Grand Slam victories this week with his unprecedented 21st Grand Slam title at the Australian Open.  Nadal was no favorite.  Coming in as the six seed, he faced battles as four of his last five matches went at least 4 sets, and two, including the final, went 5 sets.  The final was spectacular as the Spaniard battled back against Russian Daniil Medvedev, ten years his younger.  After dropping the first two sets 2-6 and 6-7, Nadal won each of the next two sets by a single break in winning only his second Australian Open.  What a hero and he joins his other contemporaries in his second Longhorndave Sportsman of the Week honors!
Posted by longhorndave at 9:27 PM