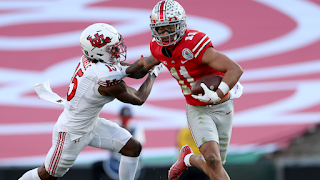 What a fun crescendo to the end of 2021 highlighted by the usual high level College Football Bowl Games, not the least of which was the College Football Playoff.  However, where the playoffs lacked in excitement, the Rose Bowl made up for in action and competitiveness.  A see saw affair ended up landing on the Ohio State Buckeyes side, much due to a record-breaking receiving performance.  Buckeye receiver Jaxon Smith-Njigba dominated the game in a way no receiver had ever before.  Not the Rose Bowl.  Any Bowl.  Smith-Njigba hauled in 15 passes for a record breaking 347 yards and 3 TDs as Ohio State beat the scrappy Utah Utes 48-45 in one the great classics of the "Grandaddy of them All".  It was Smith-Njigba's 5th straight 100 yard game and by far his most productive in a 1600+ yard season.  The Buckeye's sophomore leading receiver is a worthy Longhorndave Sportsman of the Week!
Posted by longhorndave at 7:20 PM