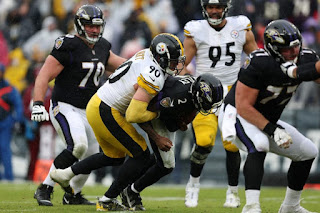 In a thrilling final weekend to the NFL season, lots was on the line for borderline playoff teams needing to "win and get in" and the format of all Division games just added to the drama.  One of the most unusual finishes settled the AFC playoff race, in which the Pittsburgh Steelers secured a spot with an overtime win over rival Baltimore Ravens but had to wait out a dramatic OT thriller on Sunday night to confirm their ticket.  However, it was the Steelers superstar, and now record setting pass rusher that was the story of the day.  T.J. Watt tied an NFL record by recording his 22.5 sack of the season to tie Michael Strahan for the single season record.  And before you throw the "17th game" card, Watt missed 2 full games with injury so it's as legit as it comes.  In winning our Sportsman of the Week, T.J. receives an honor his brother J.J. never achieved!
Posted by longhorndave at 8:54 PM