I think anybody who watches a sporting event on TV expects instant replay to be a big part of their watching experience, but I'm here to tell you, I have some issues with its current usage. Specifically, overuse. No doubt. Particularly in the arena of baseball and football, which happen to be my favored sports. 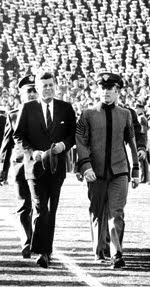 But first some history. The first authorized broadcast of the innovative and game changing broadcast technique was December 7, 1963 for the Army/Navy game. Replays had been played during the broadcast before, but only during halftime or after the game. The "instant" was a game changer. The announcer felt compelled to tell the audience "Army did not score again, ladies and gentlemen, that was a replay..."

It would be irreverent to not frame that particular game in context, originally scheduled for November 30, the game was postponed after the tragic assassination of John Kennedy on the 22nd. President Kennedy had taken a particular interest in Navy that year, and its Heisman trophy winning QB Roger Staubach. He'd performed the coin toss the year before and hadn't missed the game in the first two years of his presidency.

Navy was #2 at the time with one loss to Southern Methodist (32-28). Odd, SMU ended the year 4-6, and played in a bowl game (Sun Bowl). The 28 points were the most scored against the Ponies, so their was that.

My issue with replay stems from football and baseball. The production teams seem to feel the need to fill the time between plays/pitches with a replay of the previous action, even if uninteresting. That, in and of itself, is okay. But there are two crucial points of these sports that are being lost:

Baseball - TV broadcasts (particularly national) seem to feel the only action in a game starts with the release of the pitch. THIS IS FALSE. When the pitcher toes the rubber, that action is in play. The batter is eyeing the defense, a runner is leading off, the pitcher is running through the pitch selection (which is extremely non-trivial). But TV broadcasts seem to want to show replay up to the point that the pitcher is through the windup. This has a secondary effect as well. I, as the viewer of baseball, get my anticipation up based upon the cadence of the windup. You get up for the delivery, back off for the taken pitch, back up, etc. Instead we usually get the following:

Football - Again, TV seems to think that the time between plays is time the audience is bored and must be shown something else. Too many times, they cut back from multiple replays of a 3 yard run just in time to show the snap (or worse, play has started). Wrong, I love to see the players running on/off, the players getting the call, organizing, etc.

These get extended until the pitch is delivered or the QB takes the snap. And part of those games strategy takes place during those crucial times.

I find that in the NBA and NHL, not as much of a problem. I submit that the equivalent of showing replay during the pitcher on the rubber or team the huddle is like showing a basketball replay when the point guard is at the top of the key. No action, right? Nobody is scoring. Of course not, the whole play is being set up. And you never know when the alley oop is coming.

Same with hockey. You NEVER see replay when the puck is live, not even when held behind own goal and setting up a play.

MLB and NFL (and college football) should take note. Just because the pitch isn't in play doesn't mean action isn't happening. Half of a football play is the formation and too many times we cut back to the snap and I don't even know what personnel is in, who was in motion, etc. College is also bad because so many teams run hurry up, and I'll see at the end of the play that the team is lining up VERY quickly, but the broadcast cuts away and shows me a coach reaction to a play or the play itself and I'm SCREAMING to get me back so I can see if the defense is reacting fast enough and/or what formation the offense has.

And for what. Usually to see a replay of a tipped incomplete pass, a 2 yard run, a fouled pitch, a groundout to shortstop, or even a throw to first base.

Stop the madness. Only show replay on really good plays or plays drawing into question what happened.

A whole other blog could be written for how fans have DVR and can watch what they want if they have questions.

And a blog after that for why they show fans at the game instead of the action.

And a third blog for ANY interview done during the game. Baseball and football most guilty, how many times are we watching some interview of a non player in which the ball is hammered into the corner or a big turnover takes place.

It's not that hard, show the game, just the action, only show replay/inteverview/etc. when there is a timeout or before the huddle break. I want to watch the game, stop the overproduction!
Posted by longhorndave at 3:48 PM