A tough week in sports with the passing of Joe Paterno and Sarah Burke. Doesn't feel right to celebrate sports performance, but the games go on. 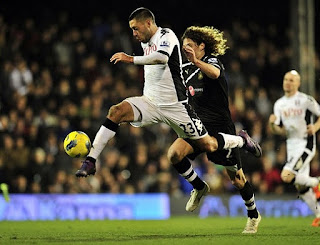 Shifting away from NFL, Clint Dempsey had a groundbreaking performance in the Fulham match against Newcastle. A rare hat trick, first by an American in the Barclays English Premier League. Dempsey broke a tie in the 59th minute, added another in the 65th, then put the game away in the 89th to ensure a Fulham 5-2 team victory. Nine netters on the season, he is representing the stars and stripes in a way unmatched by strikers in the past. Hats off to you, Clint, the LHD-on-sports player of the week!
Posted by longhorndave at 10:11 PM