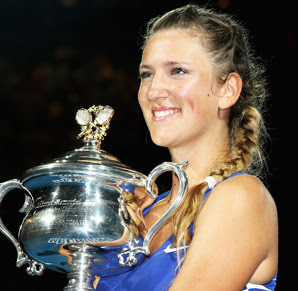 Just a little foreshadowing, Longhorndave on Sports loves when tour athletes break through to achieve their first "major". In that light, this week's Sportswoman of the week is Victoria Azarenka, 2012 Australian Open Champion. The 22-year old from Belarus set Melbourne on fire the past two weeks dropping only two sets (one by tiebreak) and punishing Maria Sharapova 6-3, 6-0. Vika lost the first two games, then dominated the Russian champion. The 5'11" phenom ascends to #1 in the world and looks to be a force over the remainder of grand slam events this year and is a true threat to win them all. For now, she can settle on being the LHD Sportswoman of the Week!
Posted by longhorndave at 7:17 PM