This was a close contest, but I went with my gut, recent memory trumped candidates from earlier in the week: 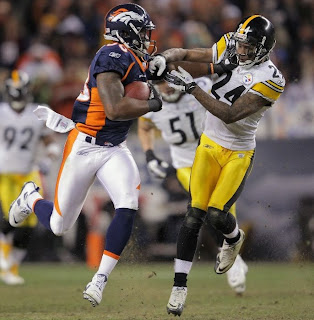 I'm going with Demaryius Thomas. In addition to his jaw dropping 80-yard historic overtime catch, his numbers on the day were simply amazing. After catching only 551 yards of passes in the regular season, he exploited a banged up Steelers defense for four catches, 204 yards (over 50 yards a catch, that's half the field for you math whiz's out there). Some people might remember the controversy when the Broncos drafted Thomas at #22 instead of Dez Bryant, then took Tim Tebow three picks later (in 2010). Have to say this one win might justify that decision.
Posted by longhorndave at 6:31 PM